I had the pleasure of working at Weddings at Tiffanys again and photographing Ken and Amanda’s amazing wedding – truly amazing! The day was absolutely beautiful, but for Ken and Amanda it wasn’t without incident. In future some might refer to this as a cake cutting disaster, but I’m not so sure. This was an unexpected opportunity for Amanda and Ken to show just how cool they really are.

This was the cake cutting photo no one saw coming. I’ve already seen a few comments on Facebook posted by those who can’t comprehend that something like this could actually happen on a wedding day. It’s this reason I must categorically state that this did in fact occur and that this is NOT a set up photo!

I must admit when I looked at the back of the camera after the cake fell I suspected this image would possibly cause an online stir. Judging by this afternoon’s Facebook response alone, it’s possible this cake cutting photo may become my most popular. It may very well become the most viewed wedding image I’ve captured to date. I suspect a lot of people who see this may think, “O-M-G!”, but I regret to add that it wasn’t the only issue of the day.

Loosing her flowers was really unfortunate as they were stunning and a lot of planning had gone into them, but understandably it wasn’t her greatest concern. Amanda’s real worry was that the bouquet had her Great Grandmother’s antique brooch attached to the ribbon wrapped around the stems. So, while meals were being served at the reception, Michael from Deluxe Kombi Service and I backtracked to where we’d been for the post ceremony portrait session that afternoon. By this time it was dark and we had no luck. When we returned I had the job of telling Amanda that we couldn’t find her flowers or her brooch. I was expecting her to break down, but she kept it together like a champion.

Then it came time for Ken and Amanda to cut their amazing wedding cake by Eden Cakes and Cupcakes, and the unthinkable happened. There was a universal gasp that would’ve been heard from down the road. Then there was a deafening silence as I’m sure many people in that room were waiting to see what Ken and Amanda’s reaction would be, but they kept it together beautifully! Then when both Amanda and Ken saw the image on the back of my camera, amazingly they giggled.

You have to remember I’ve seen quite a few couples over the years getting stressed over issues that have been nowhere near as emotionally challenging, so it’s this reason that Ken and Amanda’s gracious reaction caught me a little off guard. It also relaxed the entire room.

Lost bouquet, lost antique brooch, destroyed wedding cake, and still Ken and Amanda never forgot why they were there – why their wedding day had been planned. Their joy and love for each other overcame everything that had worked against them on the day!  To add, when I left, turning back to see Amanda still smiling from ear to ear, I couldn’t help but be moved. What a lady! Then to top it off, Ken even took the time to grab me as I was leaving to thank me for being a part of their day – an absolute gentleman!

So I bet you’re wondering, “Did they find the bouquet?” Well, the next day Michael the limo driver went back to Maleny and went looking for the bouquet again, and thankfully after some rather intensive investigation, managed to recover it – with the brooch still in tact! What a Champion! I’d like to believe the big guy upstairs rewarded Ken and Amanda for being so gracious on their wedding day in spite of the obstacles that were thrown in front of them. I will never forget their wedding, not just because of the challenges, but because of the way they both handled them!

Congrats to Ken and Amanda for being so classy!

By the Way, the reason Amanda has the engagement ring on her right finger (in the flower photo) is because that image was captured before the wedding. The wedding band is then able to be put on the left wedding finger so it’s closest to the heart and after that the engagement ring is taken off the right hand and the placed on the left wedding finger as well 🙂 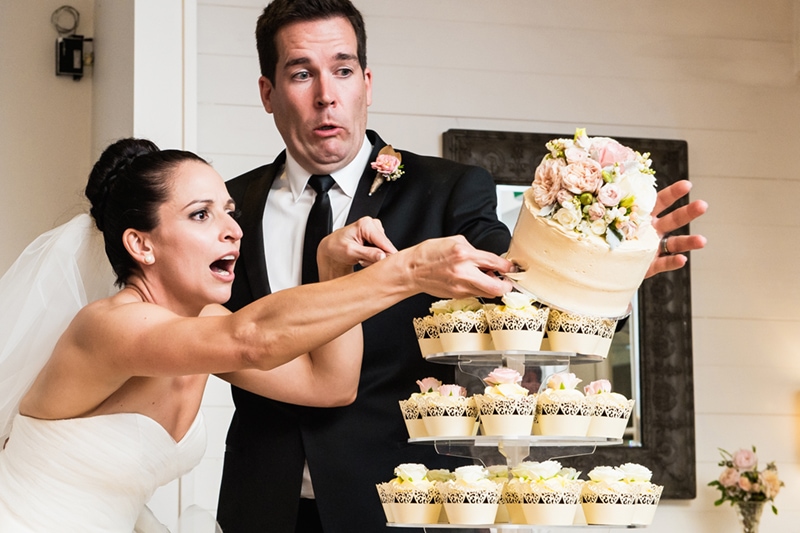 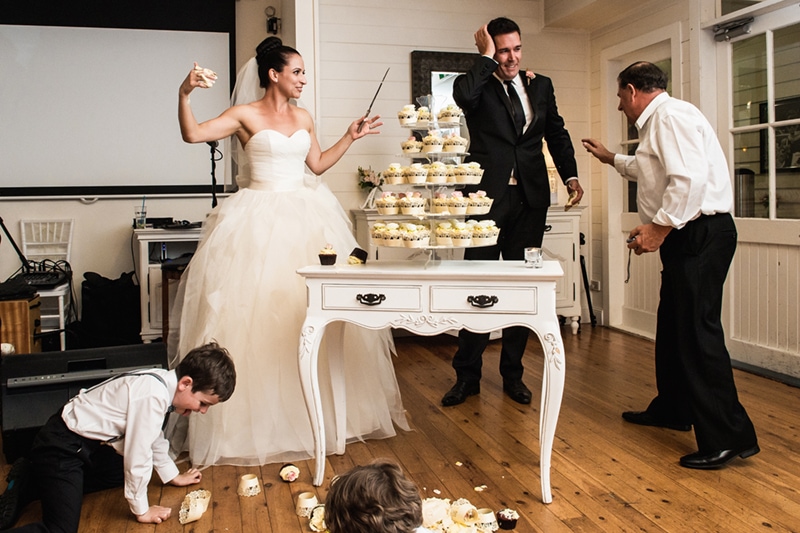 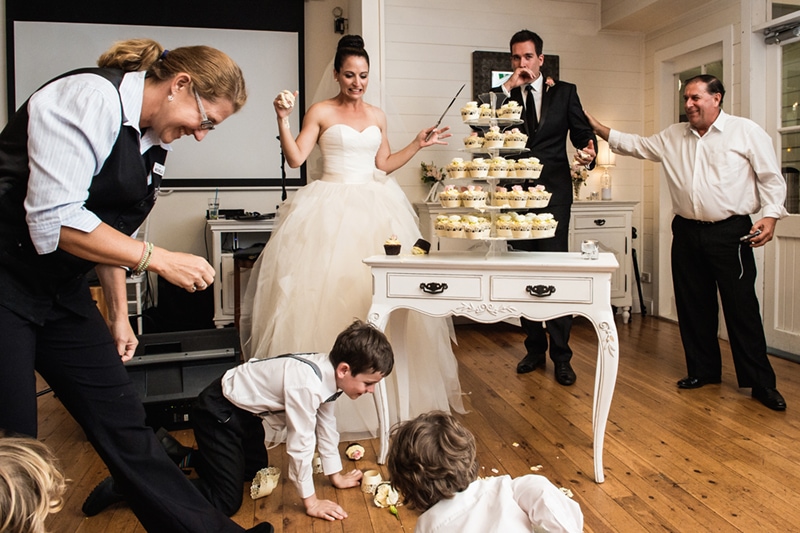 Here’s a guest image captured by Ian Ronalds from another perspective. As you can see this was the real deal. It’s funny that people online are claiming this was all set up. Honestly, for Ken and Amanda’s sake, I wish that were the case, but this actually happened. 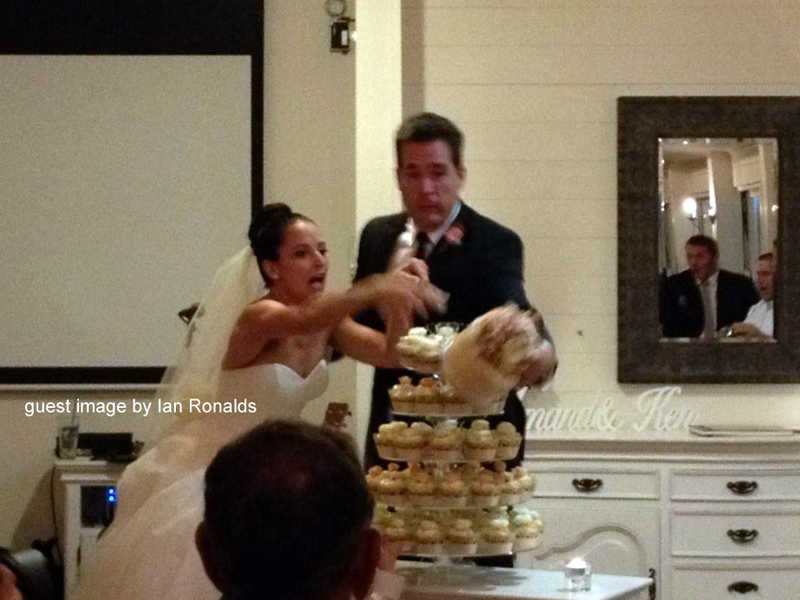 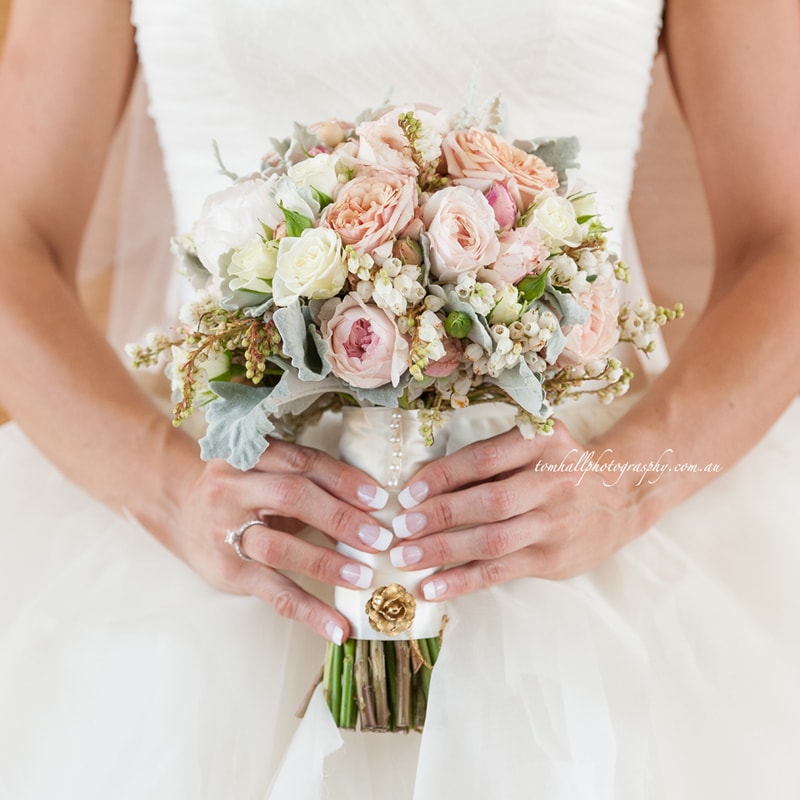 Matt Beamish
While I AM related to the groom, I think a big thanks should go to the photographer for handling this in such a professional manner (and capturing such a fleeting shot). You've handled this in a way that has shown great respect to Ken and Amanda and ultimately reflects back on your own professionalism and skill. Well done Tom.
Albert Martin
Beautiful wedding apart from the mishaps but they took it all in their stride!! Laura & Albert.
Joy Arbuckle
Tom you done an awesome job with Ken and Amanda's photo's we as Ken's mum and dad want to thank you for all your kindness and patients with everyone, it is never easy for the photographer but you made everyone feel so happy and relaxed.
Gemma O'Neill
Tom that photo is epic!! No one will ever have a photo like that again! Tell Ken I said many congrats! Lots of love Gem xx
Russ Dillingham
Great shot. Some people will doubt you no matter what. I wouldn't worry about it. It's a fantastic moment that I am sure the couple will cherish for the rest of their lives and am sure it will be displayed prominently in their album. The lighting, angle and moment is just fantastic. What I really liked was the follow up shots with the expression of the young boy on the floor.....awesome job.
Tasleema Nigh
This was a great wedding, such a shame about the cake but what an amazing photo you captured. Looking forward to working with you again sometime this year Tom! 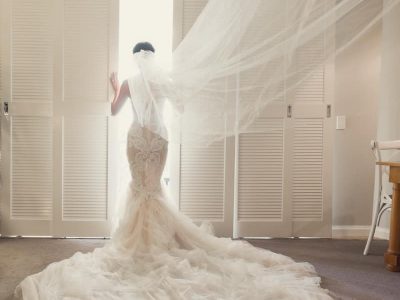 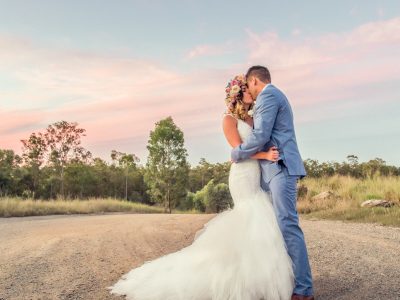 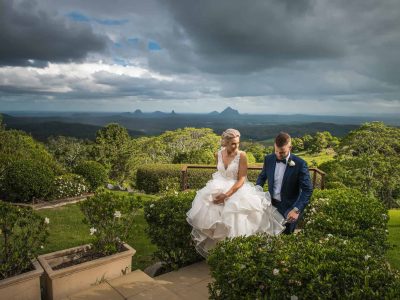